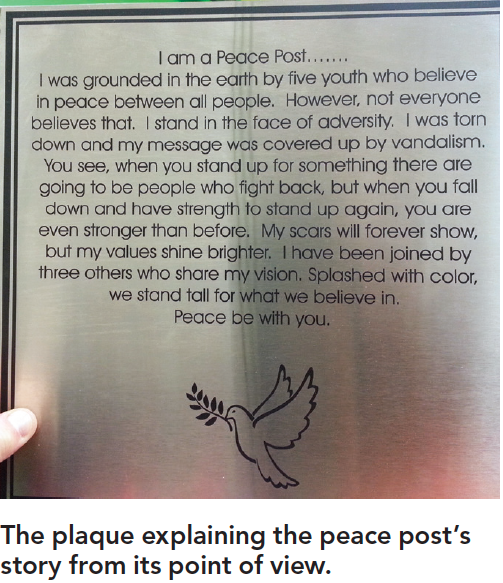 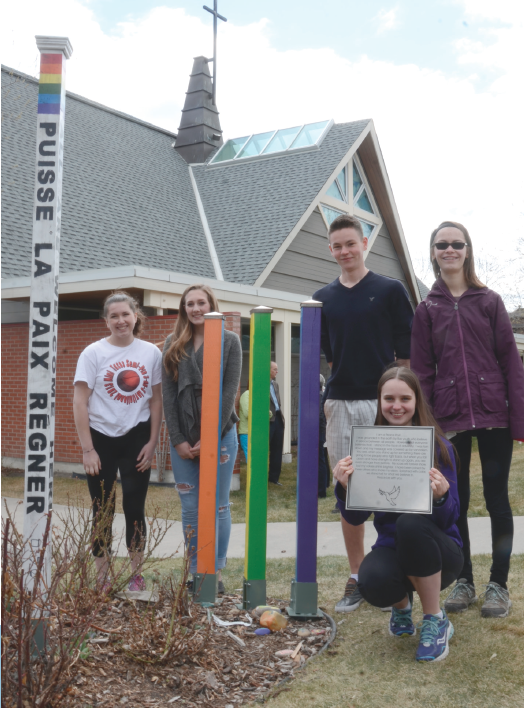 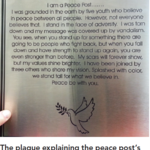 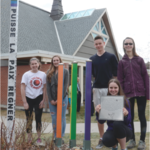 Congratulations to Hannah Rude, whose article about our peace post appeared in the September 2016 issue of Canada Lutheran:

SYNOD OF ALBERTA AND THE TERRITORIES

One year ago, I stood in the art room at Lutheran Church of the Cross, Calgary, in the company of four other youth, listening intently to our leader and mentor, Rev. Laura Holck. Scattered among us were various paint cans filled with splashes of vivid colour and paint brushes waiting to take on our creativity. Within minutes, excited voices crowded the room as we shared our ideas and sketched them onto the long wooden beam in front of us. It wasn’t long before it was being slathered with green and yellow, purple and blue—a canvas for hope and aspirations, a canvas for peace. Peace between all nations, peace between all peoples. Peace.

Several months later, just after Calgary’s Pride Weekend, the room had a different aura as we gazed at the same post, yet this time slashed with black. Vandalized, and pulled right out of the ground. Strangely, none of us were angry. Surprised and filled with questions, but not angry. “Why?” we asked. “Why?”

There were many theories—maybe the offender thought that as a Christian church we shouldn’t be accepting of the LGBTQ community. Or maybe, there hadn’t been a reason at all. Maybe it was simply a case of someone acting without thinking, influenced by alcohol or drugs. We didn’t know, but that didn’t stop us from doing something about it.

We decided to add a plaque explaining the peace post’s story from its point of view, as well as three more posts, each side portraying a different shade of the rainbow, an international symbol of acceptance for those who are different from us. We painted them in a way that all six colours were visible no matter which direction you were going as you passed them. These we grounded next to the original peace post, which had been cleaned up enough to read, but not more than was necessary.

We knew that when we stand up for something, we stand in the face of adversity. The world will fight back and they will scar us. But we will get back up again and show our scars, because we know what is right, even if they do not see it yet. And we will never stop trying to open their eyes.

PHOTOS BY LISA RUDE. Reprinted with permission from Canada Lutheran